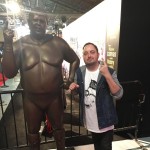 It’s Wednesday (well, Thursday morning) and you know what that means…

I have no shame to admit I’m a wrestling fan. Sure, I have hidden it in the past but not anymore. However, the one issue of being a pro wrestling fan is that it can be so time-consuming. Even if you’re investing your time to follow WWE (World Wrestling Entertainment) weekly television, you need 7 hours each week, and that’s not including monthly pay-per-view shows/specials which can add another 3/4 hours.

For a couple of years, I’ve started to rely on YouTube highlights and podcast reviews to keep up to date with what’s happening in wrestling. WWE’s presentation has been inconsistent; poor storylines, rematches after rematches, etc. It’s simply not become essential viewing.

The formation of All Elite Wrestling (AEW) in 2019 was a welcomed addition to the pro wrestling landscape, offering a genuine alternative to WWE. This week marks the two anniversary since AEW debuted its premier weekly TV show – Dynamite.

Fast-forward two years and AEW is on a high wave of momentum. From their biggest PPV numbers at September’s All Out, to selling over 20,000 tickets at Arthur Ashe Stadium for their debut in New York City, to signing three of the biggest free agents in wrestling; Bryan Danielson (FKA Daniel Bryan), CM Punk, and Adam Cole, to regularly being watched by over one million people each week.

It has also, to an extent, defeated the juggernaut that is WWE. When Dynamite launched in October 2019, WWE responded by moving its “third brand” NXT from its own streaming platform to an American TV station, the USA Network. Ultimately, making wrestling fans decide which show to watch. Despite WWE being an established brand, they would lose the “Wednesday Night War” with AEW’s ‘Dynamite’ regularly defeated ‘NXT’ in the Nielsen ratings. In April 2021, ‘NXT’ moved to Tuesday nights. It resulted in both shows receiving higher ratings.

Arguably, AEW has become must-see TV for wrestling fans. The blend of thrilling in-ring action, intriguing storyline developments, and a highly talented roster is pretty remarkable for a company that is just under three years old. It’s clear that AEW is doing something right, and it’s not only impressing fans. Throughout its two year existent, we’ve repeatedly seen WWE stars “make the jump” over to AEW wanting to be part of this exciting product. Alongside the aforementioned Bryan Danielson and Adam Cole, names such as Miro (FKA Rusev), Andrade El Idolo, FTR (FKA The Revival), Matt Hardy, Malakai Black and Christian Cage have arrived in AEW. While wrestling news sites, forums, and social media is often speculating who will appear in AEW next.

While some may see AEW as “WWE lite” due to the use of former stars. However, AEW has cleverly used those familiar names to enhance and establish its own stars. Before AEW, names such as MJF, Darby Allin, Jungle Boy, “Hangman” Adam Page, Sammy Guevara, Eddie Kingston, and Orange Cassidy were only known to those who followed independent wrestling. However, due to the success of AEW, it’s put them on a national (if not, international) platform.

In the past, companies such as TNA/Impact Wrestling have had a tendency to heavily lean on, and highlight, former WWE, leaving others lower down the match card. It could be suggested that AEW has learnt from the mistakes those companies have made. While it has used former WWE names, it’s used them to put the spotlight on unfamiliar names. In short, they’ve used the past and present to focus on the future.

More so, AEW has used its YouTube channel to launch two additional shows, Dark and Dark: Elevation to highlight up and coming names; Anna Jay, Powerhouse Hobbs, Ricky Starks, The Acclaimed, Dark Order, and many more.

Fans Know What to Expect

Unlike WWE, where a lot of the matches on RAW, SmackDown and NXT are unannounced before the show, AEW does. By announcing the full card ahead of going on air, it leaves fans anticipating what they’re going to see. The most notable example of this is the recent “dream match” of Bryan Danielson vs AEW World Champion Kenny Omega.

In addition, AEW’s in-ring product has become reliable, proving to be competitive in the process. While the use of a ranking system hasn’t been leant on as some may have hoped of early on, matches still matter and always come out with a winner and loser. Sure, you get the usual wrestling tropes such as outside distractions, but AEW has hardly used non-finishes to matches, especially disqualifications.

As you have probably guessed by now, for me, AEW Dynamite has become a weekly highlight of my TV viewing. Like a lot of TV and films these days, it’s difficult to avoid spoilers through social media. Therefore, I have to see AEW Dynamite ASAP.

Due to the time difference and other commitments, I’m unable to see AEW Dynamite live relying on Fite TV’s on-demand streaming service to catch up. Unlike WWE, which I can consume in mostly clip form, ‘Dynamite’ is something I have to watch in full immediately. The aforementioned combination of impressive wrestling and compelling angles means I simply can’t miss ‘Dynamite’.

Although I have showered AEW with praise, I’m not entirely an “AEW fanboy”. It’s not the perfect wrestling promotion. It still has issues that need addressing.

While its women’s division has highlighted emerging stars such as AEW Women’s Champion Britt Baker D.M.D., Hikaru Shida, Jade Cargill, Thunder Rosa, and Nyla Rose. Their inclusion on ‘Dynamite’ is minimal, often reduced to just one or two segments per week.

Because of its growing pool of talent, ‘Dynamite’ has a lot packed into its two-hour slot. While it’s great to see so much action, it can suffer from it too. There are times where moments aren’t allowed to breathe. For example, a post-match win isn’t allowed to be soaked in as AEW instantly moves on to the next promo, video package or interview segment. As a viewer, it can be frustrating yet I feel a third hour wouldn’t be welcomed.

A bit closer to home, AEW’s UK TV presence outside of its Fite TV availability is still frustrating. Reduced to a late-night Friday night slot on ITV4 means ‘Dynamite’ is shown two days after it’s aired in the States at an unreasonable time. In short, it’s treated as an afterthought by ITV. While it’s clear AEW has a UK following, I feel a more reasonable and reliable TV presence would increase its UK popularity.

Can’t we all just get along?

I’m going to finish this by addressing the so-called “WWE loyalists”. They’re the ones who criticise AEW at every opportunity, label former WWE stars as “traitors” on social media and so on. To them, I simply say – stop!

Not only do you look stupid, but at the end of the day – it’s only pro wrestling! AEW has allowed wrestlers another opportunity to showcase their craft on a national platform. You wouldn’t want your favourite wrestlers to be unemployed, right?

As a form of entertainment, it’s given a chance for pro wrestling to be seen by more people. It doesn’t matter if it’s WWE, AEW, IMPACT, Major League Wrestling, Ring of Honor, or NJPW. We’re pro wrestling fans and its increased visibility can only be beneficial for the sport we admire so much. So put your differences aside and celebrate the fact that wrestling is becoming essential viewing! Competition for WWE is good and is starting to bring out the best for them; just see Roman Reigns’ dominance on SmackDown.

Conclusion – Are we on the edge of a glorious period of pro wrestling?

With AEW’s emergence and WWE’s product steadily improving, it feels like we’re on the precipice of a thriving period in pro wrestling. The combination of stellar talent and increased availability (across TV and digital streaming platforms) means wrestling in 2021 is exciting again.

All pics courtesy of All Elite Wrestling (AEW)

Based in Nottinghamshire, Sêan is a freelance music and pro wrestling writer. Away from music, his interests include watching sporting events (football, ice hockey), maintaining his mental and physical well-being, and consuming books, films, TV shows and video games.

Conrad Thompson: “This is Going to be the Biggest Starrcast in History” (Interview 2/2)

Conrad Thompson: “There Will not be Another Ric Flair Match With me Promoting it” (Interview 1/2)

Tony Khan ROH “Death Before Dishonor” Media Call (Audio): How Important Was it to Have “ROH Originals” in the new ROH?

My Heart Will Go On – GCW “The People vs GCW” – Review